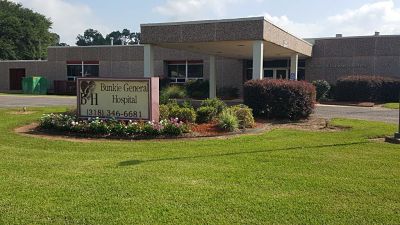 The early concepts of a community hospital in Bunkie, Louisiana, date back to 1968. Bunkie Mayor Warren Constant and the Bunkie City council passed a resolution authorizing Dr. Donald Hines to form a community hospital committee to explore the feasibility of hospital in Bunkie. The Aldermen at that time were Jasper Candella, C. Howard Hall, Frank L. Mulheam, J.A. Eiland, and Alfred Feeney. The community hospital committee members, along with Dr. Hines and architect Joe Brocata, organized themselves and visited a hospital in Church Point Louisiana for a site visit. As the group returned home, enthused about what they witnessed, the group anxiously laid plans over lunch.

The community committee worked tirelessly to rally support to organize funding, create facility plans, and secure a location to build their vision. The committee was successful in obtaining HUD funds for construction. Bunkie General Hospital was the only facility in the United States that HUD funds were used for new construction, rather than expansion. The construction finances of the hospital were supported by 40% Hilburton Funds, 40% HUD funds, and 20% local bond guaranteed by the passage of the Hospital Services District #1 of Avoyelles Parish on February 22, 1968. On February 18, 1969, the Haas Investment Company, owned by Nancy Carruth, Franklin Michael, Joe Haas, and Montez Constant, donated 5 acres for the construction of the new facility from land originally owned by their grandfather, Dr. W. D. Haas.

Bunkie General Hospital opened its doors on June 6, 1971 as a sixty-bed, full service hospital, including surgery, obstetrics, nursery, and other medical services. The Hospital operated under the direction of Dr. H. McConnell, Chief Medical Director; Clay Barrilleaux, Administrator; Elizabeth Reed, RN, Chief Nursing Officer and Thomas A. Durham, Chairman of the Board. In addition to the standard services offered, the community health organization worked vigorously for 4 years to raise funds for a fully equipped ICU unit, a new medical concept of that time. Over $60,000 was raised through an annual banquet, featuring renowned speakers such as Dr. Denton Cooley, Michael Dubeki, George Morris, and Alton Oxnar.

Since 1983, during my tenure as Chairmen of the Board of Commissioners, many changes have taken place. BGH transitioned from an acute hospital to a critical access hospital on May 1, 2004; added two rural healthcare clinics; added cardiac rehab, out-patient psychiatric services; wound care clinic; in-house cat scan; mobile MRI; digital x-rays; new and more sophisticated lab equipment. With the help of our good Dr. (Senator) Hines we converted in January 2008 to a new electronic health record system and telemedicine. A patient at BGH can be seen by a specialist from LSU Medical Center in Shreveport via telemedicine without ever leaving the building. Medical records can be sent via email almost in an instant. BGH has been able to stay at the forefront of all the modern technology.

It is difficult to look back without thinking of all the employees and staff who were a part of Bunkie General Hospital throughout the years. Where would we be today without all those dedicated people who have served with distinction, dedication, and concern for the well-being of the citizens of Bunkie and its surrounding areas.

On behalf of the Board of Commissioners, we pledge to continue moving Bunkie General Hospital forward and remain a pillar in Avoyelles Parish. We have proven our commitment by providing high quality, compassionate and safe care close to home for the past 50 years. We commit to continually invest in our facility and associates to ensure we meet the needs of our community and patients. We commit to being a Community leader and a major economic contributor by striving to create an environment so our 255 employees can effectively use their skills, and we manage and distribute an annual payroll of $7.7 million.